Arendelle Castle Celebration is pulled from Frozen, the insanely popular Disney movie released in 2013.  The set was originally released in December 2015 and has some features from the original movie as well and Frozen Fever, the animated short film released in 2015.  The set includes the most iconic characters from Frozen: Anna, Elsa, and Olaf.  Also included are three Snowgies, a fun name for mini snowmen.  The set has a few fun features fans of the movie will enjoy. 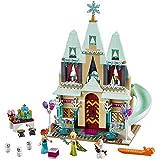 The set is currently still available on the Lego Shop and Amazon for under MSRP.  The Lego Shop has the set marked as being a “Retiring Soon” set so quantities will be limited on both sites.

Disney products always carry a high demand due to the overwhelming number of Disney fans out there.  Frozen is a relatively new IP so it remains to be seen if collectors will be willing to pay high premiums for Frozen branded products over time.  Regardless, if you are a Frozen fan, the time to purchase this set is now before is disappears from online shops.

More details on the set from Lego.com:

Enter the world of Disney Frozen and for building fun with Elsa, Anna and Olaf. Beautiful Arendelle castle’s enchanting details such as the ice room, Anna’s bedroom and a roof slide give you all the inspiration you need to recreate magical scenes from Disney’s Frozen and Frozen Fever, as well as your very own adventures. Includes Elsa and Anna mini-dolls plus and Olaf and 3 Snowgies.