The Lego Batman movie spawned a lot of really good sets, not to mention the really fun movie.  The Scuttler is a smallish, insect-inspired vehicle which features some really cool extending legs and a net launcher.  We recently named this one of the best Super Hero sets for 2020. 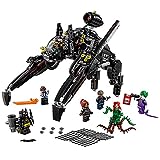 As of the time of writing this post, the Scuttler was still available in the Lego Shop and below MSRP on Amazon.  Lego has this one marked as “Retiring Soon” which will usually fuel sales as fans and collectors alike grab the set while they can.

The Lego Batman Movie is a specific niche within the larger Batman/DC/Super Hero niche.  It is difficult to tell how much of a demand there will be for this down the line as there aren’t any history with this specific line to look to.  The thing we do know is that Batman is one of the most beloved superheroes in pop culture.  The movie was well received by both critics and fans so there is clearly some potential for a bit of a cult following.

More details on the set from Lego.com:

Ride The Scuttler with Batman™ to rescue hostages taken by The Joker™ at Commissioner Gordon’s retirement party, with this exciting set from THE LEGO® BATMAN MOVIE. The highly posable Scuttler features a net shooter, six stud shooters, extendable arms, an opening minifigure cockpit and hidden jetpack for Batman. Batman is also equipped with a Batarang to take on The Joker, Poison Ivy™ and her vine monster. Includes six minifigures.